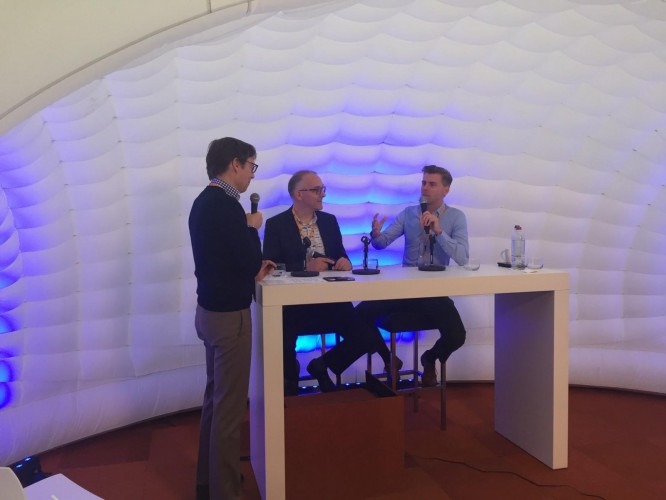 A month ago it was that time of the year again for the wind energy industry in the Netherlands. It was time for NWEA’s annual WindDays in Rotterdam. During these exciting two days, Thijs Kamphuis, an engineer at DOT and David de Jager, director of Grow were interviewed by Remco de Boer. They spoke about the ‘innovative slip joint offshore research at Borssele 5’ which was, as you might imagine, a mouth full for the interviewer.

This innovative way of connecting a monopile to a transition piece and turbine is like sliding two coffee cups on top of each other that will hold forever, according to David. David was amazed when he saw this process completed at the Prinses Amaliapark in just half an hour. One of questions asked was, why didn’t we always use this technique? Was is because of tradition, or is it too risky for the financers? The three talk about the pros and cons of the past techniques compared to this relatively new but most promising one. They talked about the future of the technique and its large size application at the Borssele 5 park. Both David and Thijs express their knowledge and work passionately and make Remco curious about what else they have planned and what their dreams are for the future of wind energy.

As some developments are still top secret, the interview was concluded on a more mysterious but very exciting note about the future innovative developments of Grow and DOT. So keep your eyes open, wind energy world!