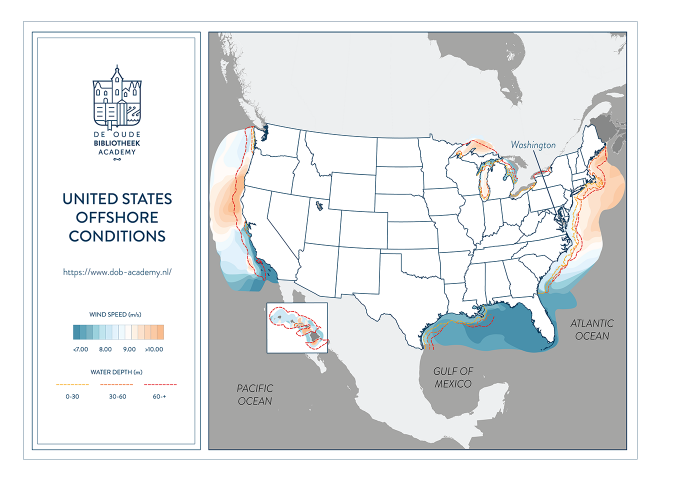 Recently Ørsted and Siemens Gamesa signed their first offshore turbine supplier contract with the United States of America. This means that the United States is taking steps to add sustainable energy to the energy mix they use and produce. Europe and Asia have been doing so since the nineties, which has resulted in a strong upward trend for offshore wind power especially in the past couple of years. The USA, regardless of their beneficial offshore conditions, has fallen behind in the offshore wind energy game. However, they are here for a comeback: making plans to harness the abundant offshore wind resources and they are coming from a corner you might not expect.

The United States have large amounts of resources for offshore wind energy, particularly along the East Coast. Apart from the fact that there is a lot of area available, the waters are also relatively shallow and the wind conditions are favourable for potential offshore wind farms. Nonetheless, the USA hardly have been investing in offshore energy sofar.

According to estimations by the National Renewable Energy Laboratory, by 2030 20% of the national energy supply can originate from offshore wind farms. However, until now only 30 MW has been installed offshore, in the form of one single wind farm. This Block Island Wind Farm has been operational since December 2015.

The United States policy has always been relatively conservative and precarious regarding energy. Their main focus was on fossil fuels, rather than renewable energy. Large energy companies play an important role in the American economic and political world. Fossil fuels are also seen as vital pillar of national security: strengthening their competitive advantage in regard to rival powers, and being able to confront hostile petro-states. A lot of climate experts were skeptical regarding renewable energy when the current administration went into office, and they were right: there still is pushback from senators in Washington. So how can the current movement towards offshore wind farms explained?

Last year, when president Donald Trump announced that the United States was going to withdraw from the Paris treaty, many American companies promised to follow the treaty regardless. Fast forward to now: according to NY Times, this pledge is clearly visible in the renewable energy sector. Many companies like Apple, Walmart and Google voluntarily invest billions of dollars in new wind and solar projects: creating a boost for renewable energy in the United States.

We didn’t intend to do this as a statement about Paris, but with how fast wind and solar prices have fallen, we see this as something that makes financial sense.

The first offshore wind project to be built in federal water is commissioned by Dominion Energy and will be supplied by Ørsted and Siemens Gamesa. This demonstration project is expected to be a gateway to long-term commercial wind development. Next to the data and experience that will be gained, this milestone will act as a showpiece for offshore wind in the USA, as the most innovative and advanced technology currently available for offshore farms will be used.

Eventually, this new industry will not only contribute to a more sustainable society, but will also bring economical benefits for the country. A scenario analysed by Wind Vision shows that, if the United States reaches 86 GW wind power by 2050, this large new industry can support up to 160.000 gross jobs in coastal regions. At the same time, greenhouse gas emissions will be reduced by 1,8% and water consumption will be reduced by 5%. Following this path, the United States will both economically profit and serve as a powerful example for the rest of the world.