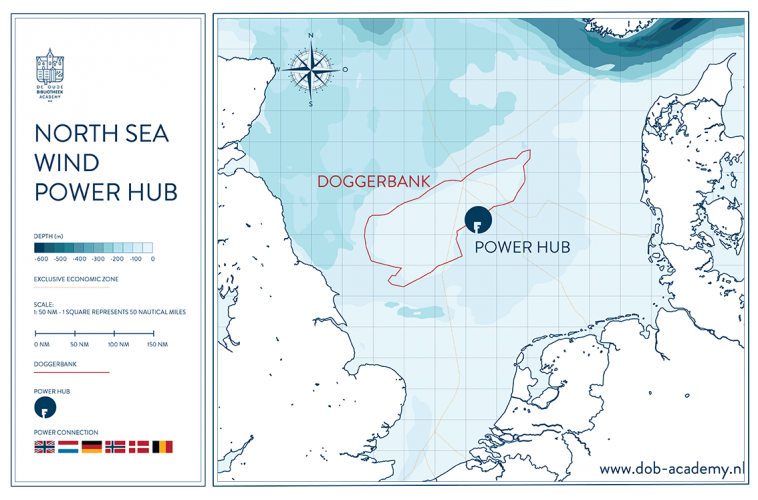 Electricity island in the North Sea

An artificial island targeting wind energy in the middle of the North Sea is expected to become reality within one or two decades. A consortium of five companies joined forces to develop a large-scale electricity system for offshore wind in the North Sea. TenneT Netherlands, TenneT Germany, Energinet, Gasunie and Port of Rotterdam are all involved in realising ‘the North Sea Wind Power Hub’. The project attempts to make the energy transition both feasible and affordable and would be a major step in achieving the Paris (climate change) agreement.

The main goal of this project is to enable wind energy production on a larger scale. A concept like the power hub would give an offshore wind farm location far out in the sea, with a high amount of available space and strong wind conditions, a chance to be realized. This is economically preferable because of the large scale and because relatively short and thus inexpensive cables to the power hub island will substitute the unaffordable long-distance cable connections to the main land. On the island, the alternating current (AC) will be converted to direct current (DC) which is preferred for long distance transportation.

The project is targeted to serve four main purposes. Firstly, an artificial island would facilitate the conversion and distribution of generated electricity to bordering North Sea countries. Secondly, such a connection will also serve as a bridge or interconnection to allow electricity trade between energy markets of connected countries. The power will be supplied to the market willing to pay the most for power at any given time which results in a consistent use of the generated power. Also, the island will serve as a working hub or permanent base for personnel doing construction and maintenance operations. Lastly, the hub will offer a place to convert power to gas for long term storage or transport purposes. Existing gas infrastructure could (potentially) be used to transport this gas to shore.

Currently, the project partners are analysing the costs and benefits of the power hub. First results are based on assumptions but already quite positive as they indicate net socio-economic benefits. Expected is that the hub could be operational in 2027 at the earliest, with surrounding wind farms to follow. The estimated capacity of offshore wind in the North Sea is estimated to range from 70 to 150 GW in 2040.