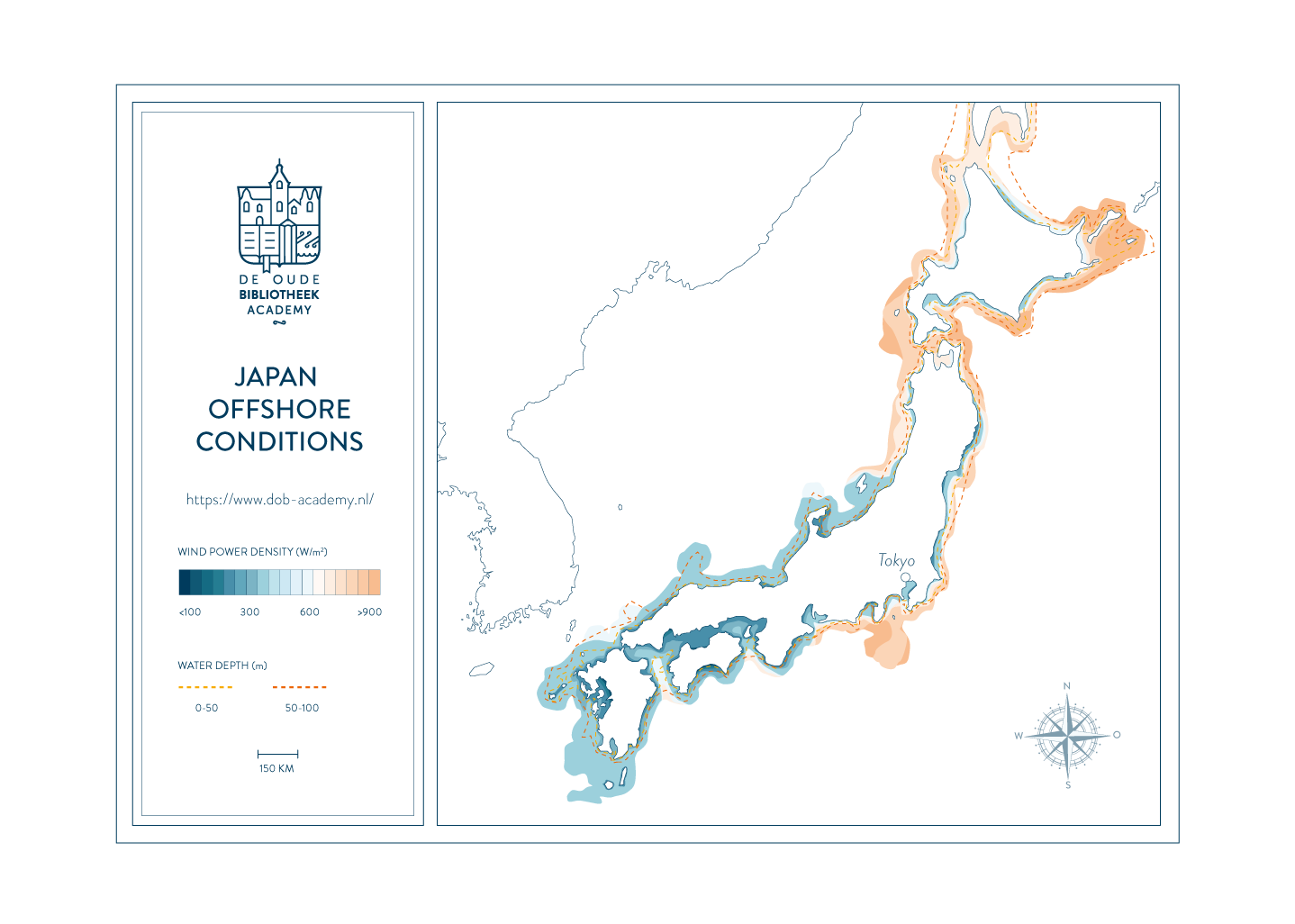 On March 11th 2011, Japan faced yet another catastrophic nuclear disaster, this time in Fukushima. Leaving the country devastated, scarred and facing an enormous energy shortage. With Fukushima Daiichi being their second nuclear disaster, Japan is treating this matter serious and is taking a drastic different path in harvesting their energy, focusing on wind- and solar powered energy resources. Funded by the British Embassy based in Tokyo, the for-mission company Carbon Trust performed an analysis to identify the main challenges and technologies in the offshore wind industry that Japan would face.

Being a cluster of smaller mountainous islands between the Sea of Japan and the North Pacific Ocean, Japan does not have a lot of suitable space on land, however it does have many offshore areas suitable for offshore wind farms. It is even estimated that wind turbines can generate five times as much electricity as land-based ones, due to wind conditions in the North Pacific Ocean. This sounds rather ideal, but there is a catch: Japan is situated on a volcanic zone on the Pacific Ring of Fire, near a so-called trench. A trench is the result of a convergent boundary of two tectonic plates creating a very narrow and deep area in the ocean. You could say Japan is situated on the top edge of a crater: surrounded by deep waters. This causes major challenges for the offshore engineers trying to design wind farms.

As mentioned above, Japan’s crucial challenge they are facing is the depths of their waters, creating multiple other challenges. Firstly, it means they are forced to design floating structures, instead of the less costly fixed foundations. With that, modelling tools need to be able to simulate the whole structure’s behaviour. Additionally, turbines will need to be optimised in design and size for the floating application. Not to mention the fact that stress, strain, corrosion and fatigue in the anchor lines being used to fix the floating system occurs significantly faster. Finally, floating foundations will always move position relative to one another, meaning that modelling of wake effects is therefore significantly challenging.

Japanese engineers have been working for years on developing and improving suitable floating structures for critical deep waters. They have yet to succeed in producing and installing one, but you could say they are forerunners in the research.

On top of that, Japan also has to deal with the fact that there are differences in power frequencies per region: Northern Japan uses 50Hz like Europe and Southern Japan uses 60 Hz like the United States of America. Meaning that their energy supply can not originate from one source of energy. Separate resources or frequency converters are needed to power both regions.

The government of Japan has been forced to shut down Fukushima Daiichi indefinitely due to a large area being contaminated with radioactive material and an overwhelming public fear towards nuclear power nowadays.

This caused Japan to face an enormous energy shortage. Aiming to reduce the shortage, the government proposed new laws in 2018 to accelerate the development and construction of offshore wind farms.

Besides stimulating the development of offshore wind farms, the government of Japan must decide on more unified legislation for usage of offshore waters to attract contractors.

Currently, each of the 43 separate regions in Japan establish their own ordinances for usage of offshore waters. Meaning that permission for occupancy of offshore sites ranges from 3 to 10 years. A unified approach is needed to speed up the construction of offshore wind farms.

Japan is very actively trying to solve the energy puzzle they are facing post-Fukushima. After such a disaster, the government is actively looking for a safer and greener way of harvesting energy and is taking small steps towards the development of offshore wind energy.

Considering their geographical location, with extremely deep waters, this development promises to be a major challenge. Nonetheless, Japan aims to have 37 GW installed capacity by 2050, harvesting over 10% of their national electricity supply.