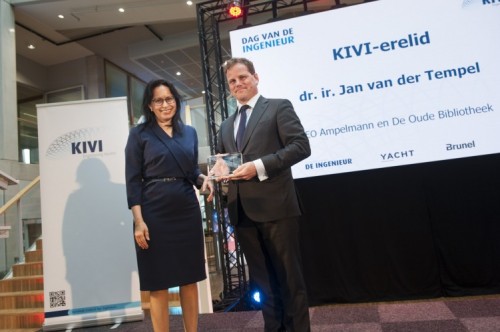 KIVI, the The Royal Netherlands Society of Engineers has appointed DOB-Academy CEO Dr Jan van der Tempel on Wednesday 21st 2018 as honorary member of KIVI. According to KIVI, Van der Tempel received the honorary membership as a recognition of his significant domestic and international contributions to offshore technology. Jan van der Tempel received the membership from jury chair Micaela dos Ramos, director of KIVI, at the University of Groningen in the presence of the Dutch Royal Princess Beatrix and Princess Mabel.

“We are impressed with the commitment he shows for education, research and innovation within (technical) science”, says KIVI president Micaela dos Ramos, “especially in the broad offshore domain and in the field of sustainable energy. This way, he makes an important contribution to sharing knowledge within and between these fields of science”. “Also, we especially appreciate his role in inventing and developing the Ampelmann, a stable gangway for offshore platforms, which allows people to work safely in an offshore environment".

Jan van der Tempel is honoured to become honorary member of KIVI. “Engineers have an important role to play during the energy transition. In my field of expertise, offshore energy, offshore wind farms can now be developed without subsidy. That does not mean we are finished, it means that by continuing to innovate more cost reductions are attainable, which will lead to profitable energy storage solutions in the future. And eventually, we will be able to use those techniques to create sustainable energy for global demand, according to Van der Tempel.

“Empowering engineering excellence is my mission and at DOB-Academy we do so by connecting offshore energy professionals and encourage them to share their knowledge. We offer inspiring offshore education and we actively share our knowledge with educational institutes from primary schools to universities. My passion is to inspire todays and tomorrows generation of engineers that contribute to the energy transition. This honorary membership serves as an extra boost for this”, says Jan van der Tempel.