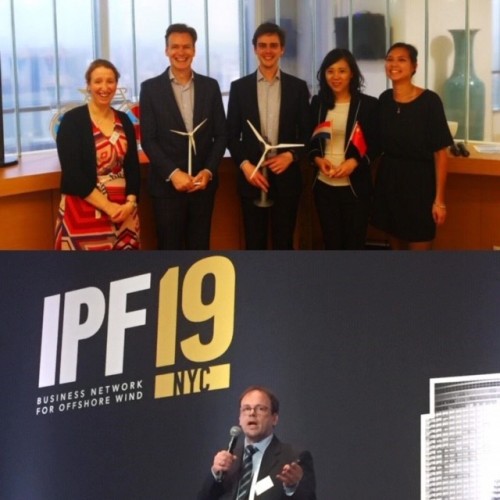 During the second week of April our teachers Hendrik Goos, Elena Stroo-Moredo and Niek Meurs were across the world providing seminars and training courses on offshore wind in New York City and Guangzhou.

Elena and Niek first were invited to the Consulate General of the Netherlands in Guangzhou on 10th April for the ‘Sino-Dutch Offshore Wind Operation and Maintenance Seminar’. About 25 businessmen and -women from different parts of China attended this exciting seminar. The introduction was given by Rob Berris, the Head of Economic affairs of the Consulate General, in which he mentioned the current and future developments in offshore wind in The Netherlands. Elena and Niek gave a total of 4 lectures on European Drivers for Offshore, Design & Installation and Operation & Maintenance. Yongzhan Li from Mingyang Smart Energy provided insights in the challenges of maintaining offshore wind farms in China.

On Saturday 13th April Elena and Niek gave a training course on Operation and Maintenance. This training course was part of the 5th Conference of China Offshore Wind Power & International Summit of Industrial Development. Around 35 participants, ranging in both experience and in background in offshore wind, attended the training course. The participants were very eager to hear some practical examples concerning installation and operation & maintenance of offshore wind farms. The training ended with an exam, which the majority of the participants successfully passed.

Wednesday the 10th of April,  Hendrik Goos attended the IPF19, a seminar for Offshore Wind in New York City. He gave two different presentations for two target audiences. The first presentation was about Human Capital and how the USA could learn from Europe in the field of education and recruitment. He was on stage together with Atlas Professionals and MHI Vestas. The second presentation was aimed at Offshore Wind education in the Netherlands, in which Hendrik discussed the Teach-the-Teacher program. Furthermore, he explained how the knowledge transfer between universities, higher- and secondary education is achieved. This presentation was part of Wind & Water Works, where different companies are part of (RVO, NWEA, Sif, Smulders, HHWE and DOB Academy!).

Thursday the 11th of April was all about NYSERDA (New York State Energy Research & Development Authority) and their presentation at the Dutch consulate. After this, the Dutch companies and organizations went to the harbor for more presentations. Hendrik gave another presentation about Offshore Wind education in the Netherlands, and also about our courses.